You may be thinking that salmon is salmon. As a first-time visitor to the Alaskan paradise, you probably have only seen salmon in a fish market or in a can at your local supermarket. However, once you arrive in Alaska, you will soon learn there are in fact five different varieties of salmon you can fish for. 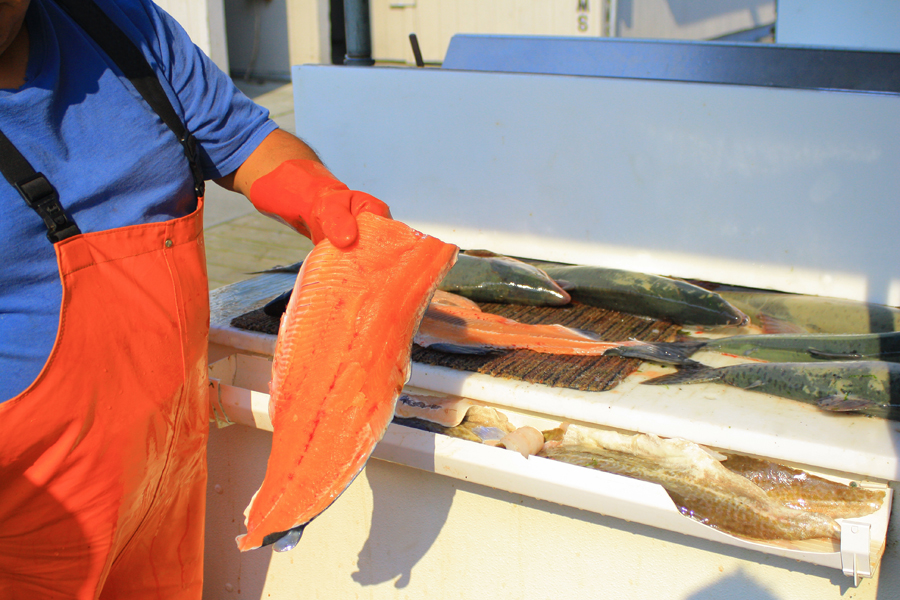 While salmon fishing in Ketchikan, it is technically possible to catch a King salmon in February, the warmer season between May and October is the best time for all of the different salmon species that call Alaska home. Most charter operations only run during these times since the climate during the rest of the year is, to put it plainly, not too hospitable for salmon fishing. Also, since Alaska is so far north, it’s hard to salmon fish around the winter solstice since it stays dark almost all the time.

If you’re planning a salmon fishing expedition to Ketchikan, Alaska, we invite you to continue reading our little primer on the various salmon species you may encounter on your trip.

5 Types of salmon you may encounter on a Ketchikan, Alaska salmon fishing trip

1. King Salmon – Known by natives as the “Chinook” salmon, this particular species is the largest one out of all of the salmon in the Pacific basin, but also the rarest. While most King salmon range between 30 and 40 pounds, some anglers have reportedly snagged ones over 100 pounds – the state record of 126 pounds was caught by a trap in 1949. Most King salmon are red, but a few have a white body, and they’re known for the black spots that run all along their back and tail.

The King salmon is also Alaska’s official fish. It’s highly desirable for its oil content that gives it such a buttery, delectable flavor.

Although available year-round, the Chinook’s annual spawning run, and consequently its best fishing in Alaska, typically starts in May and runs through June.

2. Chum Salmon – When the Chum embark on the long spawning journey out in the ocean, they have a greenish-blue color with black speks on their back and a silver color for the rest of their body. As they move into freshwater to spawn though, the green becomes more pronounced. They also develop vertical stripes that become quite obvious. Chums are also

known as “Dog” salmon because of their importance for native peoples’ dogs in the 200+ rural villages in the interior part of the state.

Since they have a low oil content and their meat is firmer over other types of salmon, chums are generally dried and smoked or used in chowders and soups.

Chums can weigh up to 30 pounds, but the average catch ranges between 7 and 18 pounds. The best time for fishing Chum salmon in Alaska is during the peak of the summer (July/August).

3. Coho Salmon – Also known as the Silver salmon because of its pronounced silvery color along its sides, the Coho also has the signature orange-red flesh, which is why it’s a preferred type of salmon for chefs across the world. The Coho is also the second largest salmon just behind the King. And like the Chum, male Cohos change from a silvery color to a brighter red during spawning, albeit not as significantly.

Coho salmon are known for putting up a good fight, which is why they are one of the most desirable for sport fishermen. The Coho averages between 8 and 12 pounds and between 24 and 30 inches in length.

Coho salmon fishing in Ketchikan, Alaska is best between July and November.

4. Sockeye Salmon – Also known simply as the “Red” salmon, fish connoisseurs generally agree that the Sockeye is the best tasting of all the Alaskan salmon. Its flesh maintains the signature bright red color, even when it’s fully cooked. Besides the meat, Sockeye eggs are a delicacy in Japan. In terms of economic significance to Alaska, the Sockeye takes the prize as #1. It gets the “red” moniker because of its brilliant scarlet color during spawning.

Sockeyes generally weigh about 6 pounds and average around 20 to 24 inches in length. Their spawning season, and therefore the best fishing, occurs between July and October.

5. Pink Salmon – The final type of salmon on our list is the Pink, which is both the smallest yet most abundant of all the salmon species found in Alaska – an eye-popping 140 million of them are caught each year! However, don’t be deceived by its size because the Pinks are known to be vigorous fighters. They typically average around 3-5 pounds but can grow to as large as 14 pounds. The Pink is also known as a “Humpy” because of the noticeable hooked snout and hump on spawning males. Pinks are also known for large spots along their back, fins and tail.

The spawning season for the Pink salmon in Ketchikan occurs between late June and mid-October. Nearly all of the Pinks harvested commercially are canned.

As you can tell, the different types of salmon that roam the waters of Alaska come in various sizes. Also, some types are more abundant in certain areas than others. Pinks for example are well known in the Ketchikan area whereas fishing for Sockeye salmon is best around Bristol Bay.

Which salmon species you wind up targeting will boil down to when you plan on visiting. If it’s the middle of the summer around July 4th, you’re more likely to snag a Chum while a Coho or Pink is more likely the farther you get into September. In particular, Sockeye Salmon is generally not targeted on rod and reel due to their feeding habits. Other methods are generally utilized(including netting), but we can sometimes get into some.

We invite you to book your fishing charter today for salmon fishing in Ketchikan, Alaska. And if you have any questions or want to discuss scheduling an expedition, please don’t hesitate to contact us today!